I don’t usually read and review children’s literature but each of these titles blipped on my radar for their own reason (explained at the end of the review … if it matters).  They were both fine examples of children’s book that I would have enjoyed reading to my kids when they were little.

LEO: A GHOST STORY written by Mac Barnett and illustrated by Christian Robinson 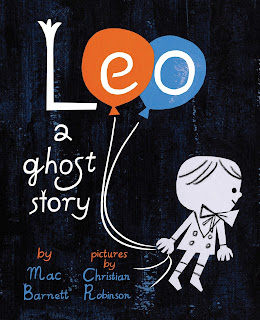 Most people cannot see Leo because, well, he’s a ghost.  He’s been living alone in an empty house for a long time reading, drinking mint tea and eating honey toast.  One spring morning a new family moves into the house and Leo wants to welcome them with tea and honey toast.  They cannot see Leo but they do see a tray floating through the room and it scares them.  This makes Leo a little sad and he decides that maybe it’s time to explore the world a little bit and he leaves the house.
Leo meets Jane, a little girl who can see him, but thinks he is a new imaginary friend.  That’s all right with Leo and he goes home with her.  Circumstances unfold and in time Leo must confess to her that he is not an imaginary friend but, in reality, he is a ghost.
Jane replies, “”Oh!  Well that’s even better”
This is a lovely book for children that in a very entertaining way may teach them not to judge due to preconceived ideas.  A valuable lesson not just children but for everyone.  This would make a suitable bedtimes story because the illustrations are simple and Leo is not at all scary looking in his old fashioned suit and bow tie. 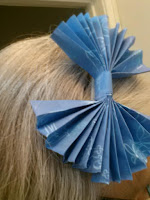 The bow tie is actually the reason I picked up this book.  I came across a twitter feed for a contest … it offered a printable version of Leo’s bow tie which you were instructed to print off, wear in some fashion and take a picture of yourself to post on twitter.  I decided what the heck and made it into a hair bow.  It was for fun.  I didn’t win a copy of the book (which I would have donated) but decided to check out the book anyway. 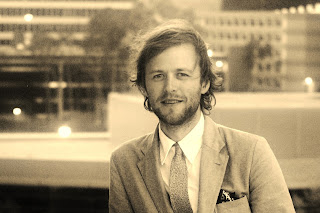 ABOUT THE AUTHOR (from the book cover)
Mac Barnett is the New York Tiimes best-selling author of several picture books, including Telephone, Sam and Dave Dig a Hole and Extra Yarn.  He is also the coauthor of the Terrible Two series of novels.
Mac lives in Berkeley, California.  His website is HERE 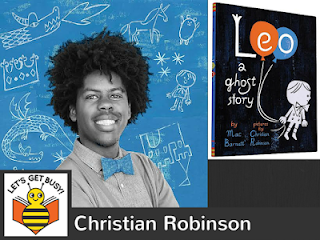 ABOUT THE ILLUSTRATOR (from the book cover)
Christian Robinson is an illustrator of several picture books, including Josephine and the New York Times best-selling Last Stop on Market Street.
He lives in San Francisco, California.  His website is HERE
BUG IN A VACUUM by Melanie Watt 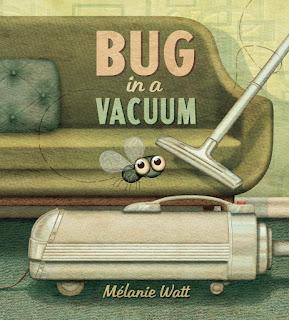 From the book description:
“A bug flies through an open door into a house, through a bathroom, across a kitchen and bedroom and into a living room ... where its entire life changes with the switch of a button. Sucked into the void of a vacuum bag, this one little bug moves through denial, bargaining, anger, despair and eventually acceptance -- the five stages of grief -- as it comes to terms with its fate. Will there be a light at the end of the tunnel? Will there be dust bunnies in the void? A funny, suspenseful and poignant look at the travails of a bug trapped in a vacuum.”
Although definitely a children’s book this is one with a more serious message.  I’m sure when Elizabeth Kubler-Ross came up with her concept of the “stages of grief” she did not envision a children’s book, but Ms. Watt has found an excellent, non-frightening way to present the concept to children.  Granted children may not pick up on the concept but it certainly is an excellent way to open the door to discussion about a difficult subject.
A trailer for this book can be seen HERE.
So why did I pick up this book?  The picture on the front looks similar to an iconic product of the company I work for and I wanted to see how it was used in the context of a children’s book.  Simply curiosity! 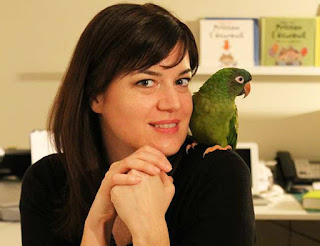 ABOUT THE AUTHOR (from her website)
It was in a design class taught by Michèle Lemieux at the University of Quebec in Montreal that author and illustrator Mélanie Watt created her first picture book, Leon the Chameleon, which was later published by Kids Can Press. Watt went on to create several more books, including the Learning with Animals collection and Augustine, which was named an ALA Notable Children’s Book. Watt has also illustrated Where Does a Tiger-Heron Spend the Night? andBearcub and Mama, which won the 2006 IRA Teachers’ Choices Project.
Mélanie’s best known book Scaredy Squirrel.  The release of Scaredy Squirrel Makes a Friend, was met with enthusiastic reviews and incredible sales, confirming the arrival of kid lit’s newest superstar.
Chester, Chester’s Back! and Chester’s Masterpiece are about a megalomaniac cat who is every bit the antithesis to Scaredy. Chester has already become a bestseller and shows the breadth and creativity of Mélanie Watt.
Mélanie currently resides near Montreal, Quebec.
childrens literature book reviews 2015